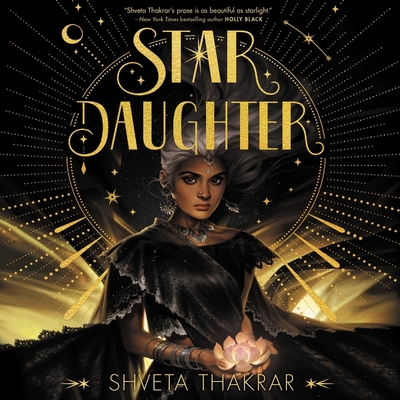 By Shveta Thakrar, Soneela Nankani (Read by)
$44.99
Email or call for price.

“Star Daughter follows Sheetal, a half-star, half-mortal girl. When her star power injures her human father, Sheetal must seek the help of her mother, a star who returned to the heavens long ago. Sheetal soon finds herself representing her family in a magical competition that will decide the next ruling house of heaven. A standalone fantasy, Star Daughter reads like a diverse version of Stardust that is all its own, taking inspiration from Hindu mythology. With prose the likes of Laini Taylor and Margaret Rogerson, Shveta Thakrar has a bright future in YA literature.”
— Isabella Ogbolumani, Buffalo Street Books, Ithaca, NY

This gorgeously imagined YA debut blends shades of Neil Gaiman's Stardust and a breathtaking landscape of Hindu mythology into a radiant contemporary fantasy.

The daughter of a star and a mortal, Sheetal is used to keeping secrets. Pretending to be "normal." But when an accidental flare of her starfire puts her human father in the hospital, Sheetal needs a full star's help to heal him. A star like her mother, who returned to the sky long ago.

Sheetal's quest to save her father will take her to a celestial court of shining wonders and dark shadows, where she must take the stage as her family's champion in a competition to decide the next ruling house of the heavens--and win, or risk never returning to Earth at all.

Brimming with celestial intrigue, this sparkling YA debut is perfect for fans of Roshani Chokshi and Laini Taylor.

The inventory on our site is not reflective of our in store inventory.  It is from our warehouse inventory. If you have questions about a title, please contact us at spartabooksllc@gmail.com or call us at 973-729-6200. Thank you!